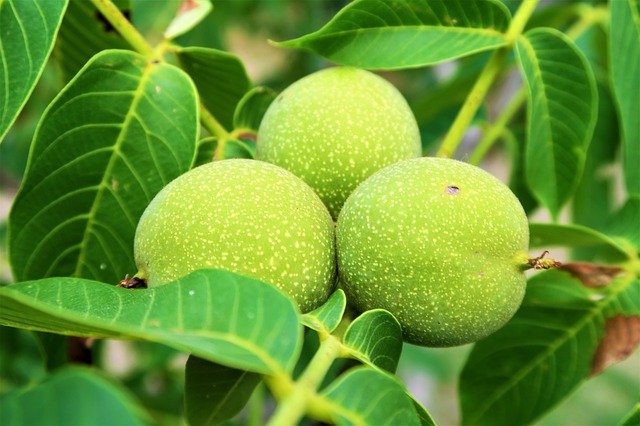 The walnut is a majestic tree that provides food and shade to those who truly appreciate them and garden-killers that produce a giant mess of stinky fruit to those who don’t. Walnut trees can be grown from walnuts and squirrels plant them often when they fail to collect their entire winter stash. Walnuts are not true nuts but are actually the seed of the walnut fruit, which is a drupe. Walnuts are allelopathic to many other types of plants; that is, they produce a chemical (juglone) that inhibits the growth of other plants. Black walnut is most notorious than this, though all walnuts produce a certain amount of juglone.

English Walnut Juglans regia (aka Persian Walnut) Is native to Persia and is a mild, sweet-tasting nut most commonly used in the commercial nut industry.

Black Walnut Juglans nigra is native to the Americas. It is more strongly flavored but much more difficult to get out of the shell, so it’s not used commercially as often.

Walnuts in the Kitchen

Walnuts should be stored at 27 to 32 °F (−3 to 0 °C) below 70% humidity to keep them fresh as long as possible. Mold growing on walnuts produce aflatoxin which is a carcinogen, so your walnuts should be discarded at the first sign of mold.

Walnuts are tasty added to baked goods and I personally like to throw a handful in my oatmeal in the mornings. They are rich in polyunsaturated fatty acids and are a good source of plant protein. Walnut hulls make a nice dark brown dye. I like it for magical ink and I understand it can be used to dye hair as well.

The extracts of walnut leaves and hulls have been recommended for parasitic infections since ancient Roman times. It does work as a very effective laxative. This should not be used by pregnant or lactating women, as the chemicals do pass though the milk.

According to Medieval Folklore, witches liked to meet under walnut trees and they were called Evil Trees. Another superstition, however, stated that if a walnut were dropped in a witch’s lap, she wouldn’t be able to rise. Walnuts were symbols of death as well as symbols of fertility making them an excellent choice to symbolize rebirth. They contain the dark energy of Earth and help raise your awareness. It is said that they attract lightning and as such, it’s a bad idea to carry them around in a thunderstorm. Could this be a connection with Zeus? Or perhaps just a tendency for tall trees (such as walnuts tend to be) to be struck by lightning on occasion? The Romans associated the walnut with Juno, the Queen of the Gods and it was considered a symbol of fertility.

Women carried walnuts to increase their chances of conception. One custom is to have a bride and groom dance around a walnut tree, to ensure the bride produces an abundance of milk for their future babies. Place a leaf of a walnut tree in the shoe of the one you desire to have his or her eyes and heart turn your way.

It was considered bad luck to plant a walnut tree too close to a stable, lest it cause the death of your livestock. Indeed the walnut tree presents a danger to horses and dogs and poisons the earth around it so that no other plants can grow in its immediate vicinity. The shade of a walnut tree was said to dull the brain and to be poisonous in various ways. The fruits, however, are delicious and nutritious and the hulls

Because walnuts, like most nuts, have a rather long shelf life, they are traditional Yuletide snacks.

Walnuts are tasty in salads, stuffing and baked goods or in a snack mix with dried fruit and other nuts.

Walnut oil has a low smoke point and so should be used for salad dressings rather than frying. It is a wonderful carrier oil for aging skin and for dry, itchy skin conditions.

Walnuts can be used as a substitute for pecans in most recipes.
Some folks are allergic. Take care.

Walnuts are rich in Omega-3 fatty acids, protein, Vitamin E, B Vitamins and many minerals.