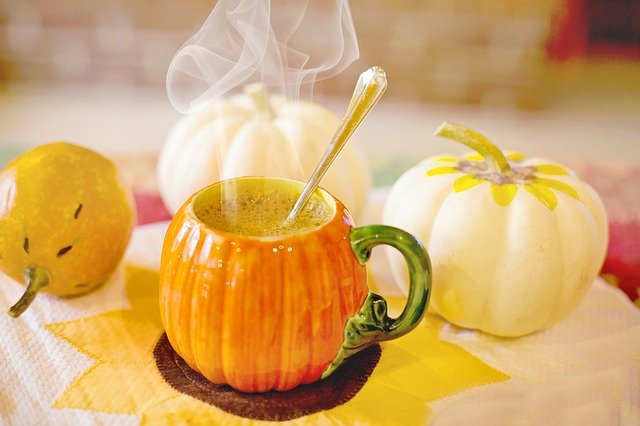 Where did Pumpkin Spice Come From?

Pumpkin spice is a spice mix containing cinnamon, nutmeg, ginger, and cloves. This is very similar to the common spice mixes used by our Western European culinary ancestors long before they started using it on pumpkins. These mixes often included black pepper, salt, or sugar. Many of these spices were very expensive and highly prized. The wealthy would douse their foods heavily with these spices when they had guests, in order to show off their wealth. The very poor might never taste them, but the moderately wealthy would get what they could afford and save them for special occasions.

(Check out this video from Townsends talking about common household spices in the 17th century. https://www.youtube.com/watch?v=ZEu6z3L34v8&t=469s )

Specific spice mixes would vary by the kitchen according to finances and personal tastes. Our ancestors didn’t always have all the things all the time, so sometimes they’d use more ginger, or leave out the cloves. It might include additional warm, sweet spices such as anise seed or possibly orange peel. When allspice was discovered in the New World, it too made its way into these spice mixes. Cooks in high-end kitchens and indeed housewives who took pride in their cooking often had their signature kitchen mixes. Later, spicery companies standardized their own mixes, and these, through marketing, became the standard. McCormick first introduced its pre-mixed Pumpkin Pie Spice mix in 1934 and it is pretty much the standard for pumpkin spice today.

Pumpkin entered the European diet after the Spanish brought it back from South America (and it made its way to North America the same way). It would have been seasoned with the usual combination of spices and made its way into both sweet and savory dishes. It wasn’t until the 1990s that pumpkin pie spice became a candle scent and then a coffee flavor in the early 2000s, but these same herbs were used to mull wine and cider and added to teas long before Starbucks was a twinkle in its founders’ eyes.

Magick In the Spices

The various ingredients in Pumpkin Spice mixes include nutmeg, cloves, cinnamon, allspice, and ginger (give or take a spice or two). These are all warming, stimulating, and protective herbs. They all correspond to the element of fire. They also each contain their own unique properties that complement each other nicely.

Cinnamon‘s fragrance enhances the spiritual energy of the place and of the person who inhales it.

The fragrance of Cloves stimulates feelings of love and encourages truthful discourse. Its energy is also that of wealth and abundance.

Allspice is used in incenses and charms to attract money and luck.

Ginger enhances the energy of anything it comes in contact with. It helps to clear blockages in the body that cause illnesses and its powers are enhanced by combining it with cinnamon.

Nutmeg is another lucky spice that attracts money and wealth as well as to inspire love and loyalty.

The combination of these herbs produces a powerful magical powder that corresponds strongly with the fire element.

It is simple enough to make your own pumpkin spice mix and if you use fresh, whole spices and grind them yourself, you will find the flavor is far superior than anything you can get in the store. As you are making your spice mix, remember to focus on your purpose for combining these spices. Is it just because they’re delicious (that’s fine!) or are you planning to use your mix to encourage a warm and loving environment and honest conversation at your next gathering? Or are you going to use it to draw love, money, or increase your luck? Keep this in mind as you grind and blend.

You can adjust this as you see fit and based on what you have on hand.

Feel free to burn that pumpkin spice candle as part of your rituals to draw love and wealth to your home. Or sprinkle your pumpkin spice mix over charcoal for the same purpose.

Use your pumpkin spice soap bar in ritual baths to break out of a bad luck rut and clear any blockages interfering with love and wealth coming your way.

Add a bit of your freshly mixed pumpkin spice to any container spell meant to draw love and abundance to your home.

Toss a handful into your autumn equinox fire and enjoy the fragrance as it raises your energy levels and draws in love and wealth.

Serve pumpkin pie or pumpkin spiced bread at your next gathering to encourage warm, loving feelings and honesty among your guests.

Simmer the whole spices in milk, wine, or cider for a delightful beverage or add it to tea. Coffee is great too!

And the next time someone gives you a hard time for drinking your pumpkin spice latte, you can just give them that mysterious smile because you know that you’re not just drinking a delicious seasonal beverage, you’re raising your energy and infusing it with the energy of love, abundance, and truth!