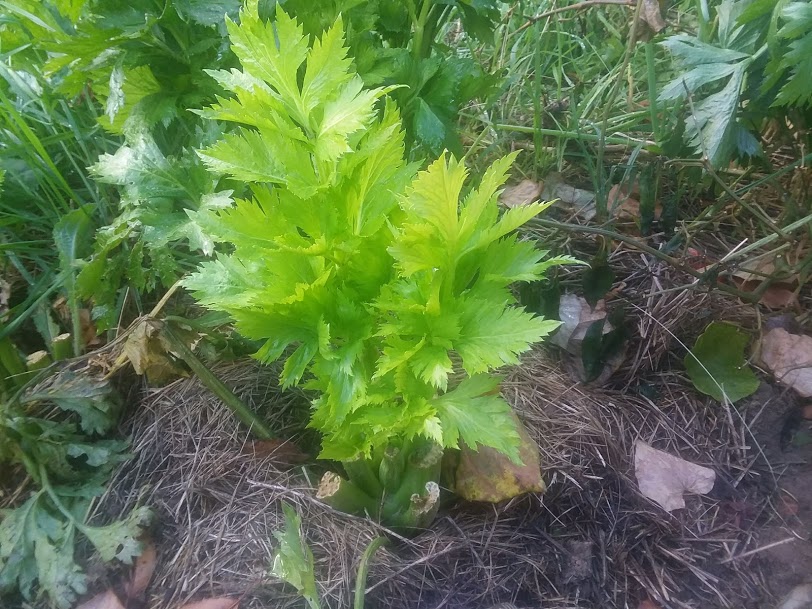 A few years ago, I planted three celery plants I bought at the garden center in my herb garden and basically treated them like my herbs. They grew lots of nice leaves, but no stalks. They were good in soup and the rabbits liked them, but I wasn’t really excited. Last year, I decided to make a serious effort in the celery department.

I have always been told that celery (Apium graveolensi) is a difficult crop, but the fact that I use celery almost daily makes it important that I master it if I want to call myself truly sustainable.  I was told that celery will bolt at temperatures above 55 degrees Fahrenheit or below 75 degrees Fahrenheit, that they are super drought sensitive and that they won’t form stalks at all unless I blanch them. We have two seasons in Michigan, sweltering and freezing and I am not about to spend time tucking baby blankets around my vegetables. So, I was a bit worried. I needn’t have been. My celery was my best crop last year. It lasted well into the cold season too.

And… guess who reappeared in the herb garden…

Since I was going into the celery adventure with some trepidation, I planted a whole bunch of celery seeds (50 peat pots) to make up for the losses I was expecting. First, I planted 25, and when they took their sweet time germinating, I bought a fresh seed packet and planted 25 more. They all germinated eventually.

My research told me that celery seeds are very tiny and difficult to get planted by themselves (which I observe to be true) and that celery is really not happy about its roots being disturbed, so if I didn’t separate my seeds, I wouldn’t ever be able to separate them without killing my celery and if they stayed entangled they would certainly kill each other. This did not turn out to be a problem.

I dumped the seeds into a saucer and carefully pinched up as few as I could get and carefully released as few as I could drop into each pot, then mixed the soil around a bit so they’d spread out. Then watered, and set them in various South facing windowsills to do their thing. I read that the temperature variation they would get there would do them good. They seemed to like it, though it may still have been too cool for them in March. After 2 weeks, there was nothing to see, so I planted more and two weeks later everything was germinating fine, both new seeds and old seeds.  The first packet came from a “preppers” canister of seeds and was just in a foil pack marked “celery”, but the second packet came from Tractor’s Supply and was called Utah Tall. I have since mixed them up and have no idea which is which, but they both did fine.

Most of my celery seedlings grew as nice separate plants, but some of them were tangled together. Some got untangled, sacrificing one of them. Some of them remained tangled together forever, forming a big double-sized clump of celery.

Transplanting celery I transplanted my celery in May when the night temperatures were above 50 degrees Farenheight. Because I read that celery needs lots of organic matter and moisture retention in the soil, I planted it in a former compost pile site. The compost had been worked in and picked over by chickens. I dug a trench about a foot deep and three feet wide and filled that with compost and planted two rows of celery in that. I then mulched all around them with woodchips to keep the moisture in.

Celery maintenance My neighbor told me celery must never be allowed to dry out and I also read that it needed to be blanched to produce long tasty stalks, so resolved to pile much around it throughout the summer, to achieve both goals with a minimum of fuss. Though the area we planted it received partial shade, there was nothing much to do about the temperatures exceeding 75 degrees Farenheight, except try to keep the soil cool. So we mulched. Whenever my husband mowed the lawn, I made him keep the clippings so I could throw them over the celery (and also the potatoes). This worked out fine. They grew steadily all summer, producing bushy leaves and long, sturdy stalks. We had no real problems with insects, although there were many spiders, woodlice and earwigs found living among them, they didn’t do any damage that I can see. The deer and woodchucks that went after the neighboring pumpkins, green beans and peppers left the celery alone.

Harvesting Celery I started harvesting toward the end of July. I just cut off stalks near the base. New stalks soon grew to take their place.  After several hard freezes that turned the rest of my garden into a vision of the apocalypse, my celery was still fresh and green.

Companion planting I did try to plant a few different things in with the celery, but all that mulching and their big ole’ canopy of greenery meant that we didn’t get much of a survival rate for anything. An over-enthusiastic pumpkin invaded the celery space but the celery didn’t notice. A few green onion seeds grew among the celery. I think that next year I will edge the row with leeks.