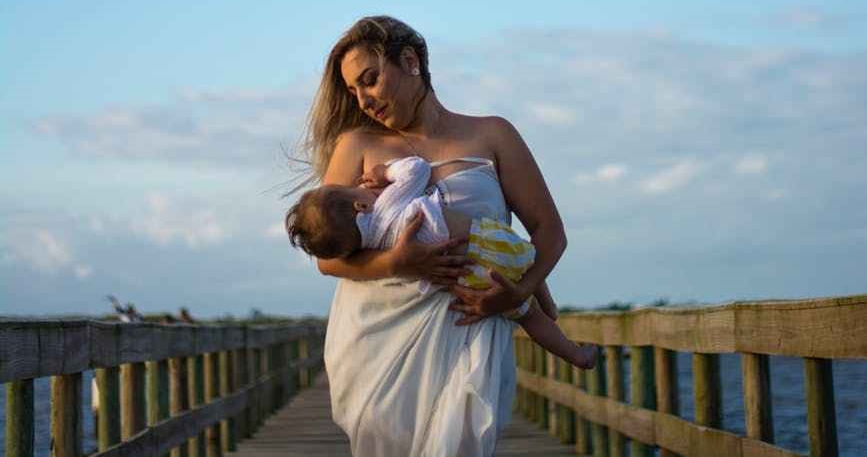 Breastfeeding is a subject I’ve become extremely passionate about over the past few years. I never thought I would, but there it is. I’m even considering joining a local breastfeeding awareness group that I recently discovered. Breastfeeding has become a sort of spiritual thing to me. I think it has to be, because it’s hard. I think I’ve made it spiritual as a sort of self-defense.

Breastfeeding is a sacrifice we mothers make for our children. It is hard. It is very difficult for a career woman to breastfeed her child. At some point you realize that you’re spending all your free time hooked up to a pumping machine and you wonder if it’s worth it. The alternative is to stay home with your child and that means sacrifices in the area of finances. We chose a hybrid option. I train dogs an hour here and an hour there in between feedings and I write with the baby on my lap as often as not. It can be… annoying. I’ve developed a sort of thirst reflex too. Whenever he latches on I am suddenly parched. I am so thirsty so often, that I even went and had an A1c test done to make sure I’m not diabetic (it runs in the family). But all this isn’t enough to make me regret my decision to breastfeed my son- even as he enters his second year of life. I know it’s good for him physically, emotionally and spiritually because I know that Mother is the name for God on the lips and hearts of little children.

I am the stand-in for whatever Gods he will one day choose to give his life to. He is too young to learn about the Gods, except in stories and his attention span for those is still quite short. One day he will turn to a Goddess or God (or several) for the spiritual nourishment and comfort he gets at my breast and the guidance he gets from my hands. Everything he does now is to please me, or at least to get a reaction from me, and he is most content in my arms, but it will not always be that way. As he gets older I must guide him away from me, but for now he is still mine and I his. I am his Goddess, and he my world.

And so it is perhaps natural that I look to the Olympian Goddesses for someone to look up to, someone to be sort of my breastfeeding Patron, but I’m having a little trouble.

There are many Goddesses associated with caring for the young and breastfeeding in a somewhat loose or peripheral way. Artemis of Ephesus has many breasts to feed the land, her people, the animals. etc. I am not sure how she relates to the Greek Artemis who had no children but was related to childbirth. I believe the Greeks identified her as their Artemis because of her association with animals. But I cannot see Artemis as a Goddess of breastfeeding. I just can’t come to it.

Aphrodite had many children and there are many images available of Her nursing Erotes. I do have a close connection to Aphrodite and it may be that She is the One. However, that impulse is emotional and not based on anything I’ve read. I think that, regardless of what else I may discover and write during this exploration it will ultimately come back to her.

Aphrodite’s breasts are probably mentioned more than those of any other of the Olympian Goddesses. Indeed, a glance at a search engine reveals that Aphrodite’s breasts are remembered today in modern commerce, serving as mascots for all sorts of products from bras, to breast augmentation services, to mastectomy products. Granted, none of these mentions, ancient or modern, have much relation to the nourishment of infants, but my experience with Aphrodite is that She is an extremely flexible and multifaceted Goddess and there’s no reason to assume her breasts don’t share these traits with the rest of Her.

The breasts of Aphrodite are usually mentioned in the context of sexuality and seduction. But what is the purpose of all that? Why, to make babies of course. And once the babies are here, the breasts are still there to handle the next phase of their development. Birds use their feathers to attract mates, and then use the same feathers to line the nests the babies will be born and raised in.

It is said that Hera came upon the abandoned infant Herakles and picked him up to nurse him (at Athene’s urging) but he sucked too hard and hurt her and as she pulled away the milk squirted into the sky to become the Milky Way. While the persecution of Hercules by Hera is well known, She is the one that set his course to Arete and Godhood. She is the one who adopted him into Her divine family after his death and give him Her daughter as his eternal wife.

Now I have always had a problem with Hera as Mother because of Her rejection of Hephaestus. But I understand that in an honor society, it is the sad duty of the mother to cast away the imperfect child. (This is something I am going to have to explore at greater length in another post.)

Tethys is the Goddess most specifically associated with nursing. Unfortunately I have zero experience with Tethys and indeed any of the Titans with the exception of Helios, Selene and Eos. Tethys is the wife of Okeanos, a Sea Goddess whose waters nourish the Earth. Her name comes from the Greek têthê, meaning “nurse” or “grandmother”.  She is the mother of rivers, streams and springs, nursing Her children from her “wet breasts”, underground aquifers. She is also known for nursing and fostering the infant Hera and is mentioned in Her Orphic Hymn as mother of Aphrodite. Tethys is definitely a Goddess I will be spending some more time exploring and getting to know.

So I guess all I’ve accomplished with this post is to establish the necessity of at least three follow-up posts.